What Are We Allowed To Do?

Tom had an early start yesterday and said the roads were really busy. Sutton was apparently packed with people, no one is social distancing at all anymore. Inside shops I suppose people are encouraged to do so, at least whilst queuing, but apart from wearing masks it seems to be drifting back to normal despite the coronavirus figures going up. I think everyone is just weary of it all now and to be frank I can't remember exactly what the rules are anymore. It is obviously different if there is "an experiment" going on but how many people are allowed inside shops, what distance are we meant to be at and what rule of what ever are we following now. Rule of 6, rule of 10 or rule of 20,000 in a "controlled situation"  I have no idea!  The only rule we all know for sure at the moment in the "social distancing guidelines" is you're not allowed to snog your work colleagues! You can really see how people got "war weary", the poor soldiers in the First World War were still sitting in trenches while everyone at home had lost that patriotic, song singing feeling months before. It must be how NHS staff feel, still slogging on and everyone has lost interest. No clapping for carers, rainbow flags and free meals just people moaning about red, amber and green list countries for holidays. You can really see how it happens. When this is all over we say to each other. I don't think it is going to be all over one day as we imagined, it's going to fizzle out until we gradually forget all about it and the bits still left we just live with without really thinking. It's not really that depressing, just life with the good bits and bad bits.

One event that is back today, in I suppose a "covid secure" way is the tennis at Wimbledon. I don't follow Wimbledon quite as much as I did when I was young but it's still a lovely summer event that I am always pleased to see arrive. I loved Wimbledon when I was a teenager, but the best year I ever remember was 1976. I had finished my 'O' levels in June and was off for the whole of the summer. The longest, hottest summer on record, it was perfect. My friends and I decided we would go to Wimbledon, it was so easy in those days. It was the second week of the tournament and Bjorn Borg and Guillermo Villas were playing on No 1 court, as a 15 year old I thought they were two of the most handsome men in the world! My friends and I got the train to Wimbledon and then the bus and queued outside from about 8am. "Would you like Centre court or No 1 court?" the woman in the kiosk asked us. Can you imagine that today, people camp out all week for the chance of a ticket. Most of the tickets are already allocated to corporate events, no chance for a happy bunch of 15 year olds to enjoy the day anymore.

We chose No 1 court as that is where Borg and Villas were playing and got seats quite near the front, and apart from a rather annoying pole in the way, had a really good view. No 1 court was small in those days before being totally rebuilt and a roof added. You felt as if you were part of the game it was so exciting. Borg won in straight sets I remember, he didn't drop a set the whole tournament and went on to win the Championship for the first of his five consecutive times. We felt we had been part of it, and that wonderful day is one that is so firmly etched in my memory that even though the sun never seems to shine on Wimbledon as it did in 1976 or even in all those years of my teenage memories, and it is a totally different sort of competition for spectators now, I always look on it fondly. Here are a couple of the photos I took of the game that day. 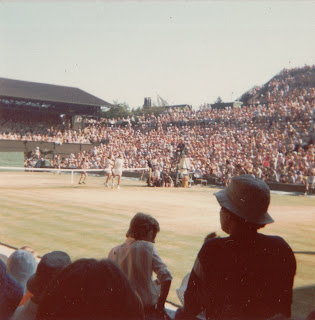 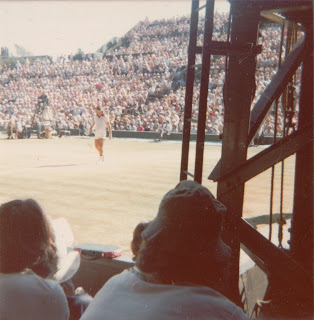 In present day Wimbledon style the weather is dreadful. It poured and poured overnight and is still raining lightly this morning. Tom is off for the next few days after today and we are planning to go back to our favourite caravan site. The lovely Carol on the BBC says the weather is going to be "a tad unsettled" I have a feeling that may be an understatement but we will still go. It's whether we go when Tom finishes work today or tomorrow morning, we have to decide when we see the forecast. I'm off to do my Dad's shopping today and a roofer who we know locally is going over to look at his roof as it needs some tiles replacing. It's not really the weather for working up on a roof though. Oh well we'll have to see how it turns out. Have a lovely day everyone what ever your plans and what ever your weather. I'll be back tomorrow or soon depending on the weather! xx
Posted by The Love Of Nostalgia at 08:49

Email ThisBlogThis!Share to TwitterShare to FacebookShare to Pinterest
Labels: In The News, Nostalgia