The Fragility Of Young Lives

Yesterday Scarlett and I took Cassie for quite a long walk to our local park and beyond it. I have to choose our walk destination quite carefully as there  is only so far she can walk happily and then it starts to become a bit of a chore and I can see she's not enjoying it so much. Cassie is also happy to walk at her pace where as Tess and Layla start pulling and get fed up. On the way we were walking along and a young man of about 20 was walking behind us. I stood to the side and let him pass as we were walking quite slowly. We passed the usual pleasant comments you do as we passed and I noticed how smart he looked. He was wearing beige trousers a very smart shirt and a straw boater hat. He looked wonderful, just as if he had stepped out of the 1930s! Scarlett who has a loud clear voice and has not quite learned she shouldn't pass remarks said loudly "He is very handsome!" Such an old fashioned word! I saw his face brighten and there was definitely a spring in his step as he walked on down the pavement. When he had gone I said to her kindly that even though he did look very nice she shouldn't really pass comments to people like that. She looked so crestfallen and said "Mummy said I mustn't say unkind things to people only kind things." I was at a total loss as what to say really as she is right, but doesn't really understand yet that social restraints mean we can't really be shouting things like "You look nice!" to people in the street. It's a shame we can't though as I'm sure it may brighten people's days.

We walked round the park and then all the way along the path that takes us almost to Sutton where the path ends so we have to turn round and walk back to the park. It was so full of wild flowers and the grass was so long it was a nice exciting walk for Scarlett and Cassie too. I think the path belongs to the rail company but they have extended the park into it to make a bit of a wildlife walk along the edge of the railway track. There is a chart to show how many different butterflies have been seen but sadly we couldn't see any. 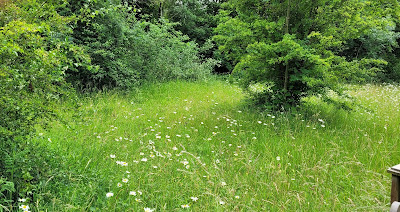 When we got back to the park Scarlett wanted to sit on a bench for a while and she told me she wanted to go and sit on the bench she had seen something had been left on as we walked past. Off we went to find the bench and as we sat down I realised it was a memorial bench to a young 15 year old who had died in the most tragic circumstances in the park a few years ago. I don't usually walk on that side of the park so had never noticed it before. The item left on the bench was heart breaking "What is it?" asked Scarlett who's reading isn't good enough yet to know what it said. "It is something put here by someone who loves their brother very much." I said. That seemed to please her and we sat on the bench and chatted about the squirrels that were running about in the park but I suddenly felt ever so sad at the fragility of young life and wished we had never sat there. 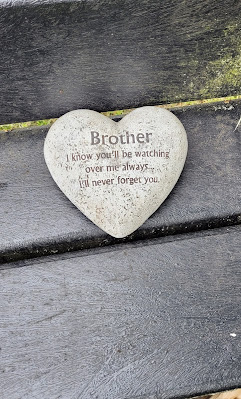 Next to his name on a plaque was added another plaque advertising Child Line and The Samaritans. Who knows what pushed him to that point but I couldn't help but think if maybe we didn't have some of our social restraints and people really could say things like "You look nice" to people in the street instead of negative things on social media which can hurt people so much, life might be a bit better for young people. 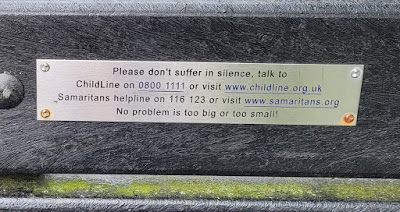 I worried all day yesterday about my friends son who had been knocked off his moped in a hit and run but last night found out although he is hospital with several broken bones he is doing well and hopefully should recover without and lasting effects. My friend is so kind and forgiving, he said the young man who drove off handed himself into police later in the day and he actually felt a bit sorry for him as he only just passed his test and had the car a few days. He said this young lad made a terrible mistake driving off and the lasting effects of that may actually be worse than for his own son as he is now facing so many serious charges. As my friend said "One really bad error of judgement can ruin your life forever."
I have a day at home today with all the usual things to catch up on. Little Todd is still with us and gained 1g yesterday! I know that is a pitiful amount but at least he didn't lose weight! Eldest daughter looked at him and thought there would only be a 50/50 chance of him surviving and then it is very hard to release him after he has been fed by humans from such a young age. Oh well I'll deal with each problem as it comes along. Have a lovely day everyone what ever your plans. xx
Posted by The Love Of Nostalgia at 09:05