A Love Of Jumble Sales

My post yesterday about finding a lost sixpence brought memories of another found sixpence which I can honestly say started my love of jumble sales forever. I'm sure I'm not alone in looking at crowds queuing at large shopping centres, running to get the latest expensive wide screen TV or fashion item or some other overpriced item they don't really need and feeling annoyance. Then I feel a bit mean because maybe their love of shopping centres is the same as my love of jumble sales, car boot sales and definitely second hand book shops.
Standing at the entrance to a large field on a Sunday morning looking at cars in the distance I can't help but feel a surge of excitement at what I may find. Even if I don't find anything nice, the thrill is in the search for me and I have found some wonderful treasures over the years. But my big love is Jumble Sales. It's something about the wait outside and the doors opening and that feeling you have a limited time to find the bargains and in my case constantly trying not to be rude and pushy as it was drummed in to me as a child to always be polite! I've lost count of the amount of times I apologise when people push into me. The thing with Jumble Sales is £5 and you feel like a millionaire, who needs to be a lottery winner.


I can pinpoint the moment my love of jumble sales started. I was five years old at school and our teacher told us tomorrow there would be a Bring and Buy Sale that we could attend at the end of the day and we could look round before the parents came to pick us up. I had no idea what a Bring and Buy Sale was but it sounded exciting. The next day my Mum gave me a three penny bit to put in my little school purse and off I went. I can still remember how I felt as I looked around the tables of goods that day. I couldn't believe I could possibly afford any of these beautiful items with just threepence and was too scared to speak. One kindly Mum who was serving asked me if there was anything I liked and I chose a little bead purse. She asked me how much money I had and when I told her threepence she said that was just how much it was. I was overjoyed.
I can remember clearly skipping all the way home with my Mum regaling the wonders of Bring and Buy Sales to her. When I got home I ran upstairs to examine my wonderful purchase. Inside the purse there was a little zip pocket. I unzipped it and inside was a shiny sixpence. I couldn't believe it a beautiful purse and a profit as well. That was it, I was hooked and still am. Our house is full of fantastic (I think) finds, in fact we probably only have about ten new items in the whole house. That's it, just writing this post and I'm off to search out the local paper and see what local jumble sales are on next week. I feel more cheeful already!

Posted by The Love Of Nostalgia at 13:00

Not The Best Start To The Year But A Lucky Find

I have to be honest 2016 has not got off to the best of starts despite all my high hopes. Serious family illness has left me feeling stressed and exhausted and running back and forward to the hospital means all my organisation with not spending money has gone out of the window as despite stocking the freezer, I keep coming home to finding them munching through take away pizzas! I'm determined to try and stay as positive as possible though and keep on top of things.
I'm not a superstitious person at all but I did find something the other day that I think I will keep as a good luck charm. I was putting the ducks away just before it got dark and was hosing down their run. As I watched the water running down the flower bed I noticed something washing along in it. I was too intrigued to ignore it so rescued it from the mud. I saw straight away it was a dirty old coin, at first hoping it was Roman or something, I realised it was an old sixpence from 1961, the year after I was born. 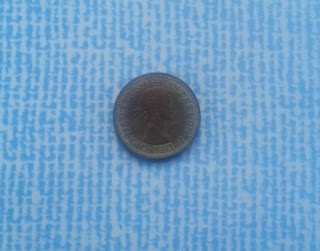 As well as not being superstitious I also have a pragmatic view of ghosts, I nether believe or disbelieve but am sure if they do exist they would not hurt us, The day we moved into this house 11 years ago one of our neighbours came round and took great glee in telling us, whilst we were carrying in boxes, the previous owner who was an old man, had died in the house and they had to break in as they hadn't seen him for several days and found him dead. I'm not sure if he was trying to scare us but he was out of luck as we are all made of much sterner stuff than that!  I looked up the local records after we moved in and found the same family had lived in the house since before the second world war and Horace was one of the sons who didn't marry and stayed at home with his parents eventually living in the house on his own.
We all feel so sad for him going from a full family home to dying all alone and I often think of him. Strangely sometimes I can smell cigarette smoke even though none of us smoke and when the house is quiet we all have heard what sounds like someone walking down the stairs even though there is no one there. Even our border collie stands up when we hear it looking towards the stairs and wags his tail. Border collies are incredibly tuned in dogs and I always say if he likes the ghost that is good enough for me!
I wonder if the sixpence belonged to Horace, dropping out of his pocket when he was out gardening. It has lay there for so many years until I found it. I'm going to polish it up and think of it as a good luck charm. There is such a nice feel to this house despite what happened, if Horace is watching us I'm am certain he was the kind of man who is hoping things go well for us and a dog lover as well!

Posted by The Love Of Nostalgia at 13:12