Those Two People In Every Country

I'm sure I'm not alone in being horrified and heartbroken by the increase in racist attacks being reported at the moment. There were three lovely young Muslim women on the news last night so upset talking about abuse they had faced. If I could have squeezed into the television and given each one of them a hug I would have done.
My wise old Dad went to sea at 15 years old. Over the years he has travelled around the world many many times. He loves to talk about the wonderful people he has met in each country and has a tale to tell about all of them. He has a fantastic memory even though he is 85 and can recount in minute detail conversations and funny incidents from 70 years ago. When ever he talks to a nurse, doctor or domestic at the hospital he will tell them a tale  of the country they come from. One thing he always says is "I have travelled the world and in every country I have met the same two people, the person I like and the person I don't like."
Why can't everyone realise there is good and bad in every country and to judge each person on their merits. I hope these three young women meet kinder hearted people in the future and don't start to believe everyone is the same in this country. 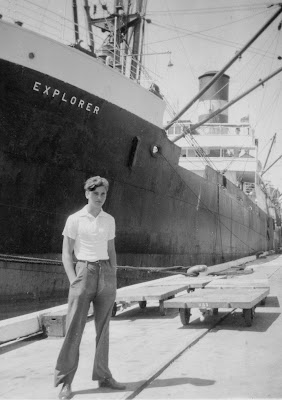 Posted by The Love Of Nostalgia at 08:15

Email ThisBlogThis!Share to TwitterShare to FacebookShare to Pinterest
Labels: Family

The Wastefulness Of Some People!

My eldest son has been doing some extra agency work driving lately and has been delivering catering equipment to mainly very rich clients and to corporate events, As a family we are totally unimpressed by celebrity and the trappings of wealth. We would rather walk our dogs in the countryside or have a nice meal with family but even he was amazed by the job he recently went to where the house was over 2 miles from it's front gates! The main eye opener to him though has been the waste.
He says that as he comes from a family where we have always had to be careful and not throw food away he feels like crying at the total extravagance and waste of some people. After corporate events tray loads of perfectly good food are regularly chucked in bins, but an event he went to last night was the worst he has ever seen. I won't mention the event or the well known company but as most average people can't afford to buy from them anyway maybe they feel not part of the real world. Big plastic crates of food where being thrown into skips. Ham, sugar, fruit, cakes, scones and much more where all chucked in. Surely a local charity could be informed so people who need it can be given it. The staff agreed it was wrong and happily told him to help himself but said it is what always happens. It really upsets me this happens and I can't even boycott the company in protest! 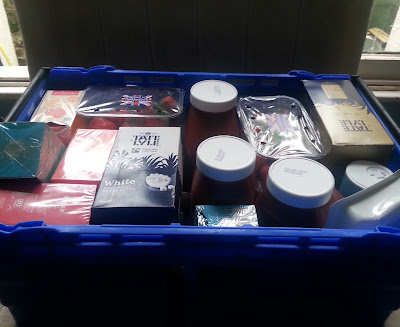 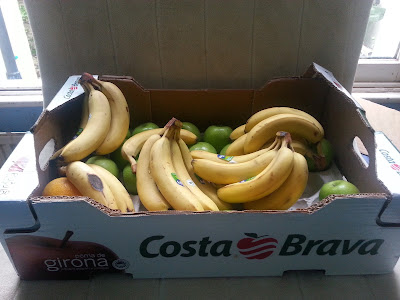 I think I'll take some of this into the hospital when I visit tomorrow. 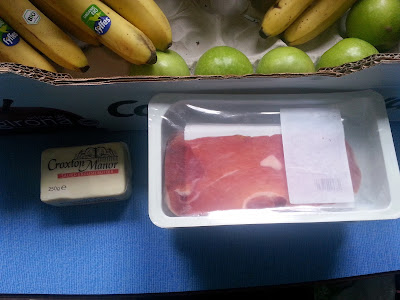 We have eight packs of this ham! 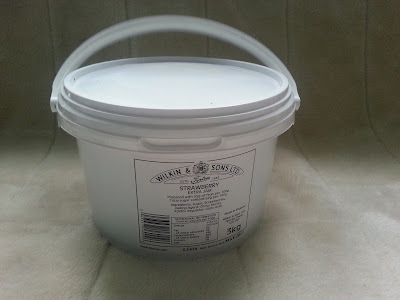 I think I better make a few Victoria Sponge cakes with this. 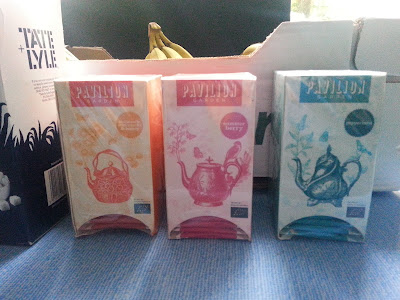 I will give these as presents. 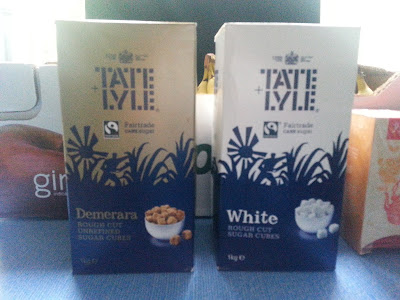 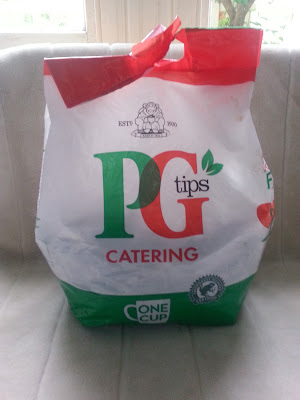 And we certainly have enough tea to go with them. 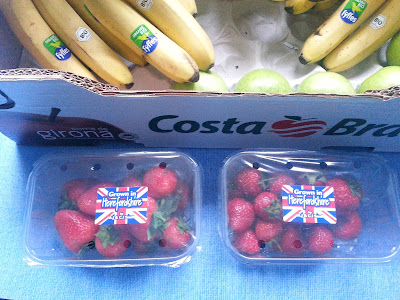 We had these strawberries after our tea tonight and they were delicious. But one thing I am most pleased with is this orchid. It's called a Phalaenopsis orchid and it is still in it's wrapper with the price of £20 still on it. Apparently there were lots in the skip but the china and glass planters had shattered on all the others as they were thrown in. This one had lost it's flowers but otherwise was undamaged. It may look very plain now but I love it. I will nurture it until it flowers again and will feel as though it has been rescued and brought to a proper home were it will be loved and appreciated! 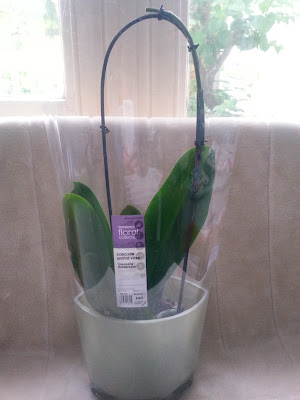 Posted by The Love Of Nostalgia at 21:09

For Everyone Who Loves Knitting

I am not a very crafty person really. I would love to be but I'm afraid my knitting skills haven't really progressed since I was 12 years old. All I can run to is a little knitted blanket when we get a new puppy or kitten and I have a few nice colourful scarves I wear when I walk the dogs that I have knitted. My Mum always tells me I should knit scarves for everyone for Christmas they look so nice but I think she is just being kind. I look at lots of the blogs I read and can't believe how talented some people are, I really envy them.
When I was on my way home from the hospital this evening we stopped at our local shops to buy a much needed bottle of wine. While Tom was in the shop I noticed the sign outside the wool shop. It really made me smile and I wanted to share it with everyone who loves knitting. The shop have made a colourful cover for the roof of the sign outside the shop. How lovely, how clever, it has really made me want to try and improve my knitting skills it looks so nice. I hope this makes other people smile as it did me. 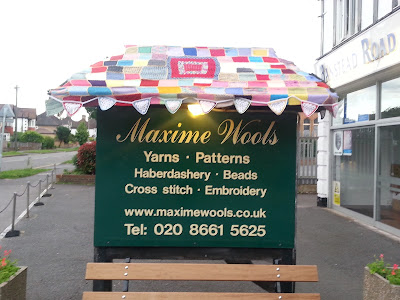 Posted by The Love Of Nostalgia at 22:09

Email ThisBlogThis!Share to TwitterShare to FacebookShare to Pinterest
Labels: Knitting

What To Do About The Lack Of Eggs

For years we have had a constant supply of eggs. With lots of ducks, hens and quail a lunchtime omlette is quite a routine for us. For the first time the fridge is empty of eggs. After we had to rehome the runner ducks our egg laying birds have diminished. we only have Scoot the duck and her egg laying season has just come to an end, Felicity the rescue battery hen who we have had for over three years and hasn't laid an egg since last year and Molly the Bantam who has decided to go broody. I haven't bought eggs for over ten years and I really can't bring myself to start. I have to decide what plan of action to take. I fancy some new big hens but we are worried they may pick on little Molly. We could buy a few more bantams. The trouble is young bantams probably won't lay until next year The other day we went to our local farm to buy some chicken food and had a look at the young pullets they have for sale. They certainly are very pretty. 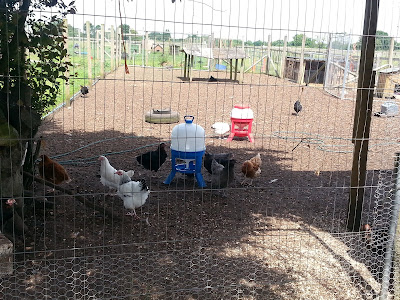 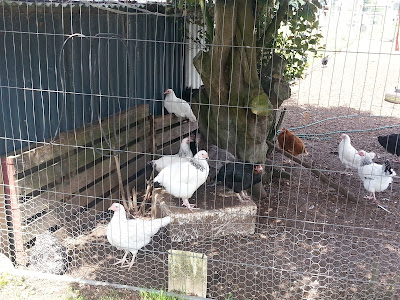 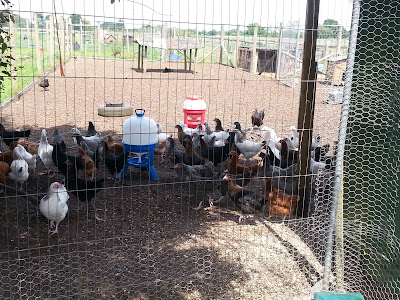 I have to make a decision soon before the lack of protein in my vegetarian diet makes me ill! Oh dear I'm so indecisive. I will make the decision in the next week and share the photos of our new additions.
Posted by The Love Of Nostalgia at 22:04

Our lovely little runner ducks have had to be rehomed. Sadly with all that is going on at the moment we felt they weren't being looked after as they should be. We had to clean them out every day really, as anyone who keeps ducks will know how messy they can be, and we were struggling to keep on top of that. We tried really hard to keep them together as the are such good friends but all the city farms would understandably only take the girls. I was adamant that I would rather keep them and struggle on than let them go anywhere were they wouldn't get a really good quality of life. Then someone recommended the swan sanctuary near Teddington who were delighted to take them all as they have so much space.
They have several enormous ponds and the pens are completely fox proof. They even have a hospital and operating theatre! Tom took them and said they all walked off in a line together and went straight into a pond without a backward glance to their Dad! . He said the woman who runs it was possibly one of the kindest most dedicated people you could wish to meet and we cannot say how grateful we are for their help. I can't help but feel sad when I look at photos of them but we could never have given them the quality of life they will have there. I'll always remember those cute little ducklings though and I know I'll miss them for a long time to come. 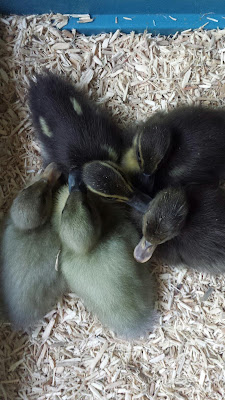 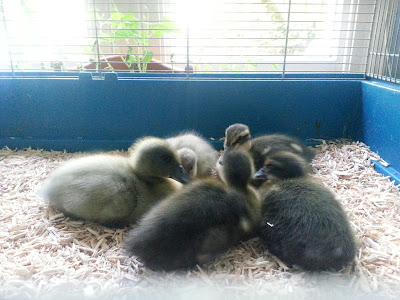 We still have our little ducks Scoot and Carue though and I definitely get the feeling Scoot is looking very smug to have the other ducks gone and the whole house to herself again!
Posted by The Love Of Nostalgia at 20:49

Reasons To Be Cheerful...

...not very many I'm afraid. My Mum has been in hospital for two months now and there have been some dire days really. Every day for two months I have left for the hospital with a feeling of dread as to what will greet me today and there have been a lot of tears shed. My poor Dad after 60 years of marriage is totally lost.
Strangely though this abnormal way of life is becoming normal and I have got into a bit of a routine. I suppose this is what happens without you realising it to begin with. I wish I had my old life back but I know it is not coming back any time soon so I have to deal with this different one. Because of the type of person I am I'm always clutching at small reasons to be cheerful to try and get me through the day and I have found one enormous one which has really helped me in down times. Kind people.
I have met so many new people in the last couple of months and virtually without exception it has been a total pleasure. I always believe that no matter what you see on the TV the majority of people are good. Even a lot of the bad ones have probably just lost their way and are not sure how to get back. But my experiences in the last few months have convinced me I am right. Staff, visitors and other patients I chat with them all and all I find is kind people simply trying to deal with what ever life has thrown at them. I would say 90% of the hospital staff are not British and the kindness we have met is without exception. I wish some of the people talking on TV at the moment could have the pleasure of meeting them.
We sit there late every evening at home recounting stories and usually laugh out loud at some of the tales of the day despite the bad bits. Last night my eldest son brought round this dog door stop he had found in his lock up as he thought it would cheer me up. How could it not? As I say to my family at the end of every day Well we are all here to tell the tale and long may kind people win through! 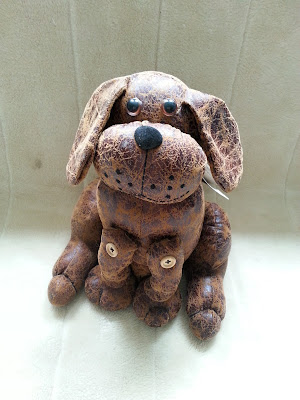 Posted by The Love Of Nostalgia at 15:04