The Best Of Friends Together

After me worrying about Layla getting through the new gate I looked out of the kitchen window yesterday morning and saw her looking through it in a worried and stressed way up the garden and Tess our Border Collie had disappeared. I had to rush up the garden and climb through the gap in the fence, sneaking round the garden at the back of our house praying no one came out and caught me. The fact she looked so pleased with herself for breaking through our new fortifications was rather worrying in itself so after Tom returned from the dump an hour was spent trying to make it escape proof. I hope we have managed it but I'm going to keep a close eye on her for a while and I'm sorry for ever thinking Layla was the naughty dog! Layla found the whole incident very worrying and of one thing there is no doubt how much she loves her best friend! 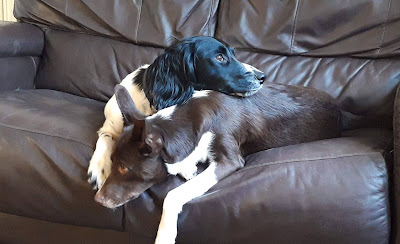 On the subject of the dump Tom was full of praise for how smooth it was taking items there now they have the new appointment system. He was saying he hopes they keep this on after lockdown as it ran so smoothly. However no matter how faultless the system seemed, the workers at the dump were telling him that they have over 100 no shows a week of people who have booked and don't turn up so something like that may make them have a rethink sadly.

We spent the rest of the morning, before the rain arrived, pollarding our plum tree, which we do yearly to try and keep it a manageable size. Pollarding may be a bit of an exaggeration, it's more like pruning the top but it is quite a tricky job with Tom up a ladder, in the middle of rose bushes, and me offering advice "Mind your head! Mind the fence!" We finally managed to complete the job just before heavier rain arrived and at the same time workmen arrived outside our house to do the same job in about 15 minutes to an enormous Lime tree outside. "That's it" said Tom "Next year we're getting a chainsaw!" 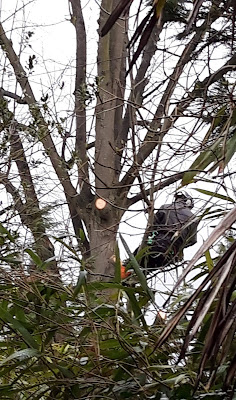 There has been lots of announcements yesterday about relaxing the rules of lockdown. The one I am most interested in is when I can see family normally as that is the one that affects me most. The main one that sticks in my mind is the total easing of all social restrictions on the 21st June. Eldest son's birthday! I'm beginning to wonder whether he had a word with Boris!
A nice day is forecast today and I have a lot to catch up with so I think I'll just prioritise the jobs by importance and work through them one at a time. I hope everyone has a lovely day what ever your plans.
Posted by The Love Of Nostalgia at 07:57

Email ThisBlogThis!Share to TwitterShare to FacebookShare to Pinterest
Labels: Gardening, Our Dogs