It was another warm day yesterday, a sunny cheerful sort of day that somehow brightened us all. Tom is on late shifts all the way though until next Tuesday but at least that means he gets the morning at home. I had ordered an extension to the hosepipe with the replacement attachment and we ran it up the side of the garden fence so not only does it look much tidier I can sit on the bench and give the ducks a shower instead of them just having a swim about in their little pool. They loved it and I can see on warm days this will be a job all of us will want to do as it is so amusing to watch their antics when they are enjoying themselves.

I may even try the cockatiels with a bit of misting on warm days now the hosepipe reaches right up to the end of the garden. They certainly seemed to enjoy the early spring sunshine yesterday. 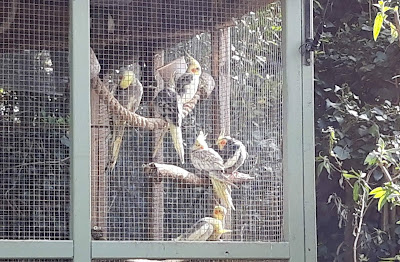 There has been more news about things hopefully opening up later in the year. Musical festivals have announced they will be taking place later in the summer. A friend of mine who is a musician has announced he will be playing at venues later in the year, after a year with no work I am so pleased for him. For me, one really exciting thing I am looking forward to almost seems possible now. My sister and I were meant to be going to see David Essex in concert last September which was of course cancelled and postponed until this September. It was looking as if it was a distinct possibility it may not even happen then but now suddenly it seems a bit hopeful! We saw him at The Sutton Granada and The Hammersmith Odeon in 1974 and 1975. Sigh! What happy days. For any one else who remembers that twinkle in his eye here is a trip down memory lane!
Scarlett is coming today and sadly the weather doesn't look quite so good for us, but other parts of the country who have been having rain are at least due some sunshine. Hopefully we'll still get out for a walk and have a bit of fun today. I hope everyone has a lovely day what ever you are doing and is managing to plan something nice for after lockdown. xx
Posted by The Love Of Nostalgia at 07:01