I didn't really get a relaxing day yesterday in the end but spent most of the morning sorting things out to take to the charity salesroom. The items we are taking I pondered and pondered about. A few weeks before my lovely neighbour died she called me in as I as walking by and told me she had a really big collection of figurines she wanted to get rid of and she wanted to give them to me. She thought I may like some but any I didn't want just sell as she knew I was selling on ebay at the time. After she died her husband said would I still take them as she had wanted me to have them. It took half the morning to move them and they were piled practically to the ceiling in the dining room all still in their boxes. It was very awkward as none of them were really to my taste. I kept a couple that were quite nice so I had something to remember her with and then the pandemic started so we put them in the loft. We have decided it's no good we are going to have to be hard hearted and get rid of them. I can't help but feel guilty though.

When I was looking through them I came across some bronze figures of old fashioned sportsmen. I thought they may be quite nice as garden ornaments, especially if they get a bit of an aged, antique look. After lunch I took the stones I have removed from the aviary and scrubbed them clean and hosed them down. Then I added them to my new rockery. I had intended to add three figures, the cricketer, the runner and the snooker player but the snooker player's cue was like a darning needle it was so sharp! I was worried one of the foxes would walk into it in the dark and do themselves an injury so that is going. I'm quite pleased with the finished area. 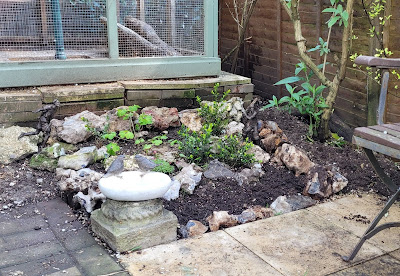 Youngest daughter wasn't so sure as I was taking them out. "I'll have to see it" she said with a very disapproving look on her face. I had to smile, it all reminded me very much of something we were talking about at my Dad's house the other day. Years ago my Dad brought home a garden gnome, he called him Fred and proudly displayed him in the flower bed. Mum was horrified as she used to really dislike garden gnomes. but didn't want to hurt Dad's feelings so would just push him behind bushes every time she was in the garden, my Dad would bring him back out never knowing how he ended up behind a bush. This gnome moving went on for 35 years. I can picture my Mum tutting and saying look at Fred sitting by the lawn, as she dashed out to hide him.
When we were in the garden the other day I said "Where is Fred?" There was a long silence as we looked around the garden. "He must have got broken and thrown out" said my Dad. "I'd remember that" I said thinking about the years of gnome moving. He has completely disappeared! None of us have any idea how. It is very strange. When I had finished the rockery youngest daughter came out to have a look. "They look quite nice" she said in the same grudging tone my Mum would use about Fred. If they start moving, or even worse disappear I'll want to know why!
I spent the rest of the afternoon weeding and tidying. I still haven't got any more compost so my planting has come to a halt. Everything is coming to life so much, I won't be happy until it is a mass of greenery but it is getting there.

This morning we are taking all the boxed figurines to the charity showroom then going on to the garden centre. My Dad gave me a garden voucher for Christmas that I still haven't spent because of the lockdown so I have that to treat myself with. I'm really looking forward to finding something nice, but it definitely won't be a gnome! Have a lovely day everyone what ever you are doing. xx
Posted by The Love Of Nostalgia at 07:28