It was a really bright warm day yesterday after the cold start. I worked first thing in the morning and then planted a couple of butterfly bushes I have grown in pots from little seedlings that have just appeared in the garden as butterfly bushes do. I love them but you have to keep them a bit under control and we cut down an enormous one earlier this year that had just got away from us. I have planted the new one in the same spot, it may not flower this year but they do grow very quickly so we may be lucky. After an early lunch I went to my Dad's house. I often think, when I arrive at Epsom Downs station it is one of the most beautiful spots, especially on a sunny day.

It was so nice to be out and about and my Dad, my sister and I had a really lovely catch up and planned some open air outings. We decided it will be a perfect time to do some investigating in our family tree which we chatted about all afternoon. I have been studying it for years and have recently found some incredible coincidences on my Dad's side. We couldn't quite believe it when it came to light and we said if it was written in a book no one would believe it could happen. Later in the week we are going to a nearby church to have a look around the graveyard. My Dad joked things have got bad when he's looking forward to a trip round a graveyard. He also joked that at nearly 90 people will think he's choosing his plot! I'm just looking forward to us all spending some time together and uncovering more of the mystery. I'll write more about it soon.
Another really exciting thing that happened yesterday was my very kind brother-in-law has given me his spare butane gas blow torch. I have had my old Robert's radio that I used to listen to as a teenager, for years. It doesn't work as the battery connectors have become corroded. I have contacted a few places and they have said they don't mend these old radios, I've even been on to Roberts themselves with no success and I have been looking at repair cafe's but none of them seem to be open because of the pandemic. I would love to be able to get this radio working again, so I have been studying Youtube videos and have decided to give it a go myself. I have bought some new battery connectors on ebay but first I'm going to be very careful and try out the blow torch on a broken brooch I bought at a jumble sale, then I'm hoping to progress to the radio. If I master it I have all kinds of things I want to give a try. The blow torch has it's instructions so it shouldn't be too hard to work out. I'm really looking forward to a new hobby. 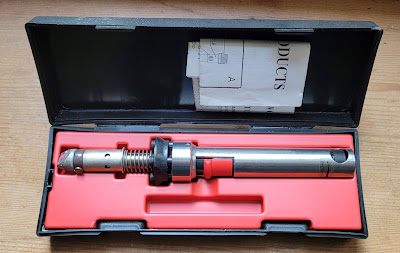 It's another sunny day today and Tom is off work. We're going to have a bit of a relaxing day as tomorrow we have a few things planned to do that will keep us busy. I'm going to sort out another couple of boxes for the charity salesroom though today as we have got some more boxes down from the loft (does it never end up there!) and of course I'm off to find a cannister of butane gas! I hope everyone has a lovely day what ever you are doing. xx
Posted by The Love Of Nostalgia at 08:29