Getting Ready To Go Out Into The World

I had a really busy day yesterday, catching up with work, giving the house a clean up and the garden a tidy up. It is lovely to be away but there is a lot to do when you return. Youngest son has been feeding the fox family and he really enjoys doing this. He is getting to know the different personalities as much as Tom and I do now. He says the cub has really been gaining in confidence while the dogs have been away and had been sitting near to the house too. I noticed while I was out in the garden yesterday it was getting closer and closer to me, looking really inquisitively to try and see what I was doing. It is a lovely little animal, just like a puppy with so many mannerisms the same. It certainly looks very healthy and I hope it's good food has given it the best start for it's life.

He has also been on baby pigeon duties and has obviously been doing such a good job, as little Todd has really grown and even learnt how to sit on the perch. I'm not going to bother weighing him again as I can see how much he has grown now. It's now the best way to get some safe flying practice for him before we set him free, that won't be for a few weeks. Youngest son walked the five miles home from work yesterday as he fancied the exercise, but stopped in the local park to have a breather. While he was sitting on the bench he noticed that while lots of people were feeding the ducks, lots of the pigeons were being fed too and that reminded me that when Scarlett and I go down to feed the ducks we always feed the flock of pigeons too, so maybe it would be a good place to set him free. Hopefully he could just follow the flock and with a bit of luck it won't be a place were someone will come along and decide a pigeon cull is a good idea. We want to give him the best chance possible. 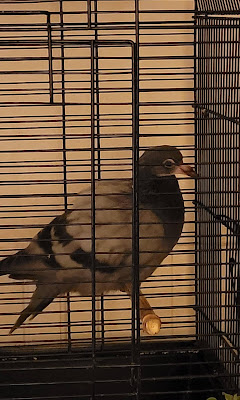 Scarlett really enjoyed her half day at school yesterday. A few friends from her nursery were there which gave her more confidence. She's such a kind, sociable little girl I know she will be fine, but I feel quite nervous for her out in the big world now. In September I will be on picking up duties sometimes and it will be ever so strange to be standing at the school gates again. It really is standing at the gates as well as because of coronavirus no parents or carers are allowed in, they have to drop off and pick up all the children, even the tiny ones, at the gate. There has been no showing round the school for eldest daughter and her partner, everything has been done online, even the guided tour and meet the teacher. It has certainly been challenging for the school but I suppose Scarlett doesn't know anything different so will adapt fine.
I'm going to The Marsden this morning for a blood test, then on to Lidl do do some shopping for the weekend. I'm leaving early as there is rain forecast later and I've been soaked through enough this week! Have a lovely day everyone what ever you are doing. xx
Posted by The Love Of Nostalgia at 08:19